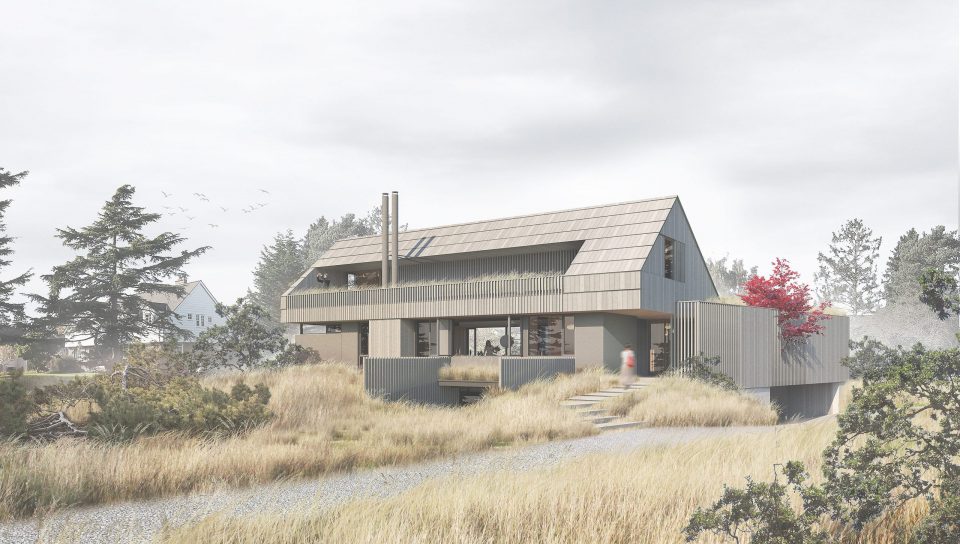 When the renovation of their Uplands home wasn’t going as planned, the homeowners of an original 1960’s dwelling contacted Adam Fryatt from MDRN Built to discuss their options. “They were well on their way with plans and had been through the design panel,” says Fryatt, who adds that “they were making far too many compromises in the design and straying too far from their aesthetic vision.”

During consultations with the couple, the conversation would inevitably return to their passion for coastal and nordic architecture. “They would show me images of homes they loved that were never going to be possible with their existing structure,” states Fryatt.

The discussion started in February 2020 and when Covid-19 hit the island, their plans were put on hold. With time to further his research, Fryatt determined that a full gut of the original house would cost approximately $300-$400 per square foot resulting in a cost differential between renovating and building new that wasn’t as substantial as they had originally thought.

“I helped the clients articulate their design ideas on the form style and, based on my own background and passion in modern design, put together a list of architects I thought would be suitable for their concept.”

Once they had chosen a residential designer, Fryatt worked collaboratively with the design team, including Kristine Bennett on interior design, to provide feedback on the architectural expression, project vision, and constructibility. “I’ve been the project facilitator from the beginning, helping steer the project by advising the clients on who’s best suited to bring into the team for the building, landscape, interior and structural design,” says Fryatt, whose experience in all of these areas allows him a unique connection to the process.

“I can take the client’s ideas and understand the implications in terms of build and costs. The rising cost of materials is obviously out of my control, but I can advise on the big architectural ideas. Maintaining the aesthetic vision while guiding the clients on where to splurge and where to trim within the budget has been an important role in the project. With every project, there is a budgetary threshold and providing feedback throughout the design has helped stay within the financial parameters to ensure the clients achieve what they envision.”

From his initial meetings with the clients, it was clear to Fryatt that they were interested in a simplified coastal style of architecture. “Everything they were showing me was from the Brian MacKay-Lyons school of architecture or from coastal California — like the Sea Ranch.”

The consistent themes were the home’s proximity to the ocean, bleached cladding, simple forms, restrained natural palette, open spaces and vaulted ceilings; essentially they were interested in designing a piece of rugged and refined coastal architecture. Not West Coast modern architecture per se, which is a different aesthetic, but something completely unique to the area. From their original design intent, he could see this was going to be an opportunity to create a hallmark project for the Uplands.

The clients were not interested in a shiny contemporary house, nor a basic modern box. “Their objective was to build something with character and texture, exposed structural elements, and features that feel more ‘rough around the edges,’ yet still executed with a high level of refinement that speaks to the craftsmanship of contemporary architecture. They wanted to make a statement.”

Within the Uplands vernacular, the barn-like structure takes on a coastal twist, offering an alternative proposal for what’s beautiful in a neighbourhood accustomed to sprawling French-style chateaus. They wanted a style that is enduring and speaks to the local landscape of rocky outcroppings, Garry oaks, and natural meadows. “Essentially, the clients envisioned an aesthetic that would be equally appealing in the Uplands as it would on a remote piece of land up Island. Our intention was to strike a balance between an urban dwelling and a more regional, rugged coastal design,” Fryatt adds.

Once the team had established the building’s form, Fryatt connected with Andrew van Egmond, an accomplished landscape architect designer from the Netherlands, now living in Victoria. His vision was to connect the landscape to the regional topography of Uplands Park, which is essentially a Garry oak meadow, while also considering the refinement of contemporary detailing. Through the process of assessing how the clients want to use the space, van Egmond set out to find creative design solutions that extend beyond the walls of the building.

“The landscape isn’t just about choosing plants and trees; the design is about enhancing the experience of the structure and connecting it to the larger environment while accentuating its sense of place,” states Fryatt, who concludes that the landscape will be the element that will allow the project to sing. “The Uplands is often described as a park-like setting, and we wanted to challenge the notion that ‘park-like’ only refers to a manicured English-style garden.”